A big success! An autonomous drone with a load capacity of 70 pounds made its first flight 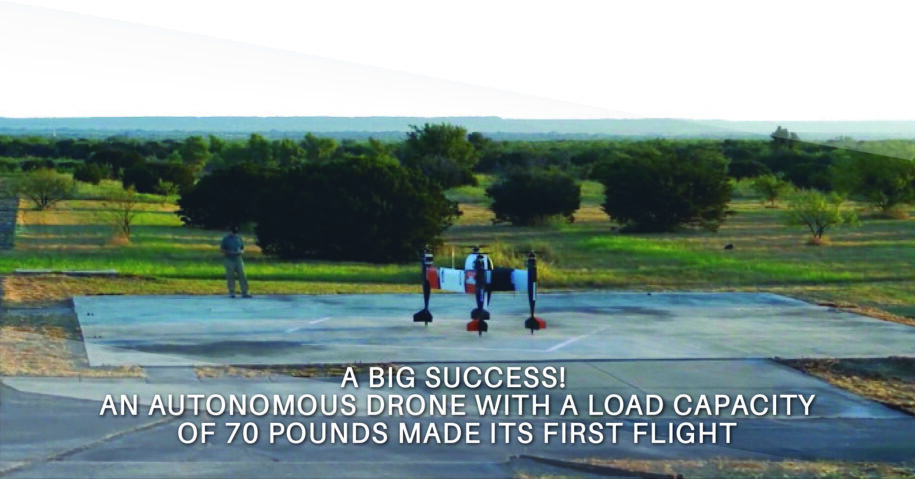 Posted by contacto@eurekaingenieria.com on 2021-11-05 | Featured

The development of a new cargo drone, the Autonomous Pod Transport 70 (APT 70), allows to carry up to 70 pounds and fly at 100 mph. It was built for deliveries and disaster relief covering distances of up to 18 miles per charge.

His first flight showed the incredible capacity of the cargo drone and its efficiency as a delivery service. This incredible achievement was recorded in Forth Worth, Texas by pioneering aerospace manufacturer Bell

The APT 70 with its 180 centimeters high it has the capacity to carry 70 pounds at a top speed of 100 mph. It has four rotors to rise and a propulsion system to go at max speed. The takeoff is done by the rotors, moreover, the propulsion system tilts at a 90-degree angle and uses its four legs as wings to gain more stability.

Sometimes the environments in which accidents are encountered can be austere or difficult to access, creating the need for autonomous aircraft to cover long distances at a speed independent of terrain.

The ATP 70 with its characteristics offers mobility in difficult terrain. In addition, its small size, flight capability, radar homing, freedom to land, low acoustics and heat emission allow it to operate where a large aircraft cannot operate.

This heavy-duty drone can be transported in three easily transportable cases. From case to flight takes only 15 minutes.

This innovative flight system allowed the cargo drone to exceed the speed of almost twice than other similar flight machines.

It was designed for many tasks, “the drone can transport and deliver medical materials to disaster relief” Bell executive Scott Drennan said in a press release.

Bell It is a company that has stood out for its innovative technologies over the years. Some of his achievements have been the Bell X-1 that broke the sound barrier and provide technology for the Apollo lunar landing research vehicle.

ATP 70 was designed to be more efficient than other drones. It has a faster deployment system than other similar machines, a faster battery change and recharging, as well as a better and faster reconfiguration to fulfill tasks.

The first flight of the APT 70 project was recorded in August 2019 at Bell’s Forth Worth Innovation Test Facility. The drone was monitored during its flight path by specialists. This first feat recorded on video made it possible to test the take-off, flight and landing capabilities of this huge cargo drone.

“We believe this capability will change the way unmanned aerial systems are used commercially in the future.” Drennan said.