New research: drones could be the best tool to fight wildfires 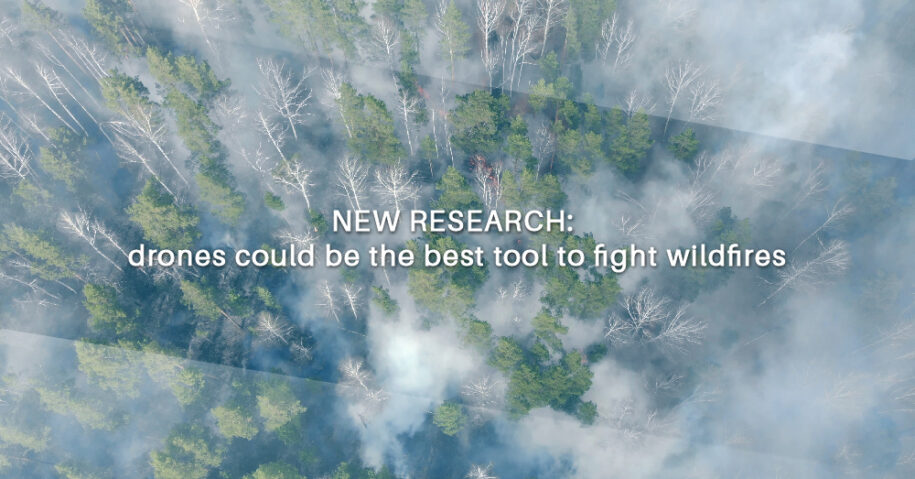 Posted by contacto@eurekaingenieria.com on 2021-04-05 | Featured

Forest fires are devastating, and the smoke from the fires spreads rapidly, causing poisoning and evicting more people from their homes, not to mention the damage to the forests and the biodiversity that inhabits them.

Drones have been helping to fight these fires, primarily by providing aerial visual and thermal data on their progress. A research project from the San Jose State University Fire Weather Research Laboratory has been investigating a different way that drones can help contain wildfires. Due to their size and maneuverability, drones can access places that fixed-wing aircraft and helicopters cannot, making them arguably the greatest innovation in firefighting.

Wildfires move erratically, making them very difficult to fight. They depend on the wind and the direction in which it blows extending irregularly in any direction, making it difficult to predict.

Traditional fire research relies on the use of towers and balloons to capture vertical wind profiles. In the case of the tower, it will be equipped with a sensor as a sonic anemometer to collect meteorological data. And in the case of the globe, it will be equipped with a radiosonde to collect similar data, which is a small, lightweight instrument designed to take atmospheric measurements and transmit them by radio.

These approaches may produce useful data for researchers, but they are not practical tools for understanding the movements of a wildfire in real time. You can’t suddenly erect a tower near a wildfire, and putting a balloon in the air near an active fire zone is also not a realistic option. But you can put a drone in the air and, in almost no time, start collecting useful data to help you understand how an active fire might behave.

Using a UAV, San Jose State University researchers have been collaborating with the United States Forest Service (USFS) and the Desert Research Institute (DRI) to take vertical profiles of atmospheric variables during active fires. To create these weather profiles, they use a DJI Matrice 200, which they chose primarily for its obstacle avoidance features and ease of maintenance.

The M200 is equipped with a special sensor to help researchers sample the three-dimensional vertical wind profiles of the winds generated in wildfires.

The sensor is called the TriSonica Mini Wind and Weather Sensor, and it is manufactured by Anemoment LLC. The researchers mounted the sensor on a carbon fiber pole that extended outside of the M200’s body and placed the sensor’s data logger on the top.

The goal of these efforts is to build a reliable dataset to understand fire behavior, which includes aspects of how wildfires behave, such as the speed of fire spread and the transport of smoke.

Their research shows that drones can be used to collect weather data during controlled wildfires, as well as potentially during large wildfires. At least 30 pilots guiding about two dozen drones were fighting wildfires in Oregon, California, Colorado and elsewhere in 2020. That’s twice the number in 2019, when the federal Wildland Fire Management Technology Act was enacted. to allow the use of more drones to fight forest fires.

This is a great advance to prevent the rapid spread of forest fires, control them and delimit the area quickly, saving many hectares of forest, species and human lives, as well as houses and towns.