A bald eagle intercepted a drone during a flight 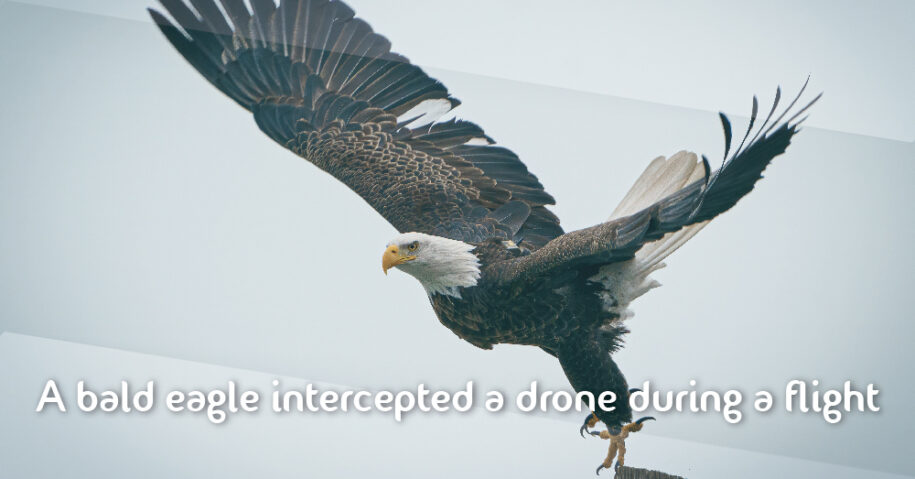 Posted by contacto@eurekaingenieria.com on 2020-11-14 | Featured

An Michigan’s upper peninsula bald eagle launched an airstrike to a mapping drone operated by the Michigan Department of Environment, Great Lakes and Energy (EGLE) pilot, breaking a propeller and sending the aircraft to the bottom of Lake Michigan.

It happened on July 21, 2020 in Escabana, Michigan. When the drone flown by Hunter King had completed about seven minutes on the air. It was conducting a mapping of coastal erosion to help communities cope with high water levels. Suddenly, the satellite reception became erratic. The pilot hit the “Go home” recovery button. The drone turned obediently, but while the pilot was watching the video, the drone started turning with great force. “It was like a really bad roller coaster,” King said.

When he looked up, the drone was gone and an eagle was flying in its place. A close couple, whose hobbies include watching local eagles attack seagulls and other birds, confirmed they saw the eagle hit something, but were surprised to learn it was a drone. It was confirmed that the eagle had not been injured by the encounter. This is how a bald eagle ended up with a Phantom 4 advanced drone of $950 that is no longer in production.

The couple and King searched for hours for the drone, to no avail. Several days later, telemetry data from the flight pinpointed exactly where the drone crashed into the lake (150 feet from shore in four feet of water), EGLE Unmanned Aircraft Systems coordinator Arthur Ostaszewski looked in a grid during two hours in a soft mud unsuccessfully. So far the remains of the drone have not been found, it is thought that it has been consumed by the density of the mud in that area of the lake.

Flight log data detailed that the eagle’s impact occurred in the minute 7:39 of the flight approximately four-tenths of a mile from King and 162 feet above the water. The drone’s speed was instantly reduced from 22 mph to 10, and within half a second, the flight log shows the beginning of a downward spiral along with warnings of “excessive spin.”

In the next 3.5 seconds, the drone sent 27 warning notifications, including one indicating that a propeller had been broken. Gaining momentum as it fell, the last communication reached 34 feet above the water, dropping at 30 feet per second, or 20.4 mph.

EGLE’s drone team is considering steps to reduce the possibility of a repeat attack, including possibly using “skins” or other designs on the aircraft to make them look less like seagulls.