Manifold Robotics will commercialize technology made by the Army that allows drones to detect power lines from a distance. 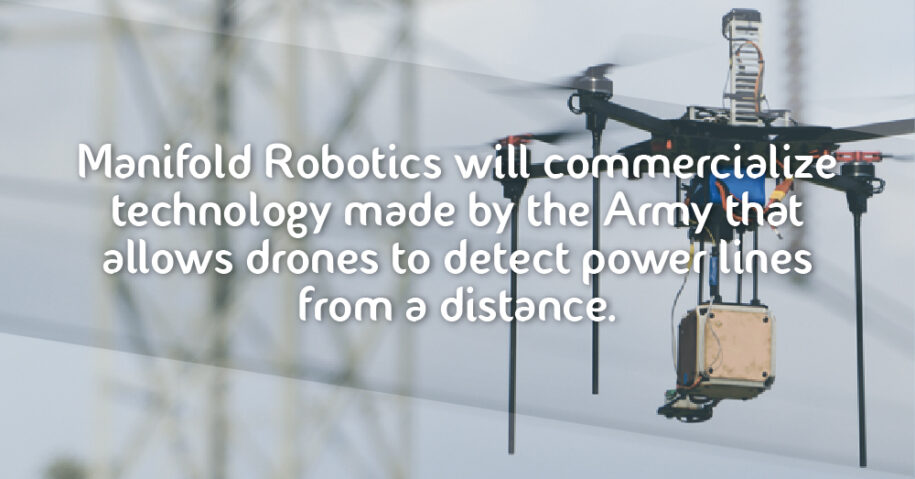 Posted by contacto@eurekaingenieria.com on 2020-09-09 | Featured

Manifold Robotics, announced the signing of a license agreement with the Army Research Laboratory that will improve the safe use of autonomous drones near power lines. They have developed a new sensor that will allow drones to detect power lines from a distance, allowing drones to become power line inspection systems. This invention describes integrated electromagnetic field sensors that provide the necessary sensing measurements, as well as the software used to model the location of the power line.

The technology was developed by Army scientists to detect energized power lines in the vicinity of an aircraft. Under the terms of the agreement, Manifold Robotics will develop and commercialize this new technology for drone applications.

Notably, power line detection technology was first launched as an initial project funded by the National Security Innovation Network, to facilitate the transfer and transition of dual-use defense technology. The postdoctoral project, led by Jeffrey Laut (CEO at Manifold Robotics) and under the direction of Professor Maurizio Porfiri, was incubated in the Dynamic Systems Laboratory of New York University’s Tandon School of Engineering, where the plan was to validate the technology and create a viable go-to-market strategy. Power lines are a collision hazard for unmanned aircraft, causing severe accidents. “We are very pleased to have Manifold Robotics as a licensee. The commercialization of our power line detection methods could have a significant impact on the development of autonomous UAS that operate near power lines, ”said David Hull, team leader and principal inventor at the US Army Research Laboratory.

Accidents caused by drones colliding with power lines are very common and for the most part this ends up destroying the aircraft, but in other cases, these accidents cause the explosion of transformers causing blackouts in certain locations. Given the number of these accidents that is increasing, without a doubt the commercialization of this technology is not only an improvement, but a necessity in the technology market, especially now that drones are beginning to have so many uses in different industries.

This will overcome the factors that limit the effectiveness of drones in the vicinity of power lines and unleash their full potential for autonomous inspection of power lines, as well as beyond the line of sight.

“We’re delighted to be working with ARL and expect that the Army technology will help us rapidly facilitate many autonomous drone applications, particularly those for power utilities and commercial operations,” said Jeff Laut, CEO at Manifold Robotics.

With remote power line detection sensors, installed in all types of autonomous drones, a new field of opportunities opens up for this technology, allowing companies and individuals to add more drones to their work tools every day, which simplify work, always in a safe way.